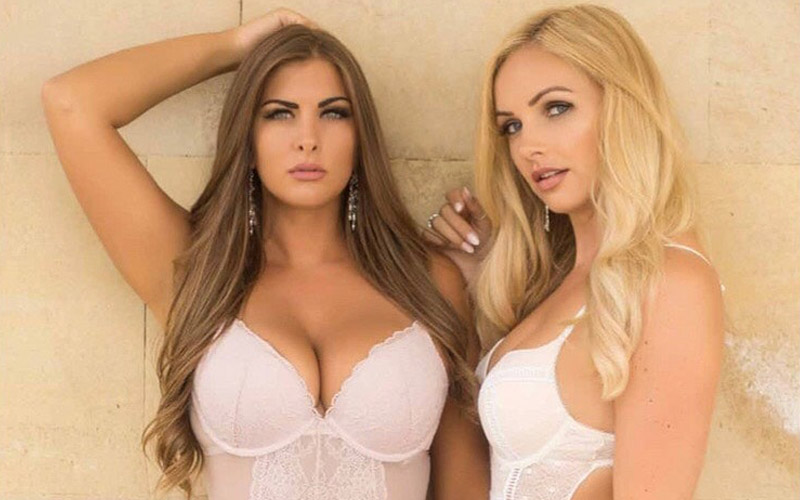 It’s fair to say it wasn’t the happiest of new years for darts walk-on girls Daniella Allfree and Charlotte Wood.

Back in January, the hugely popular duo found themselves front and centre of a political correctness storm when the PDC took the decision to axe walk-on girls accompanying players up to the oche from all their televised tournaments.

Suddenly both Daniella and Charlotte found themselves on the front pages and in front of the This Morning cameras, as they fought against a decision which still proves wildly unpopular with all darts fans. Similar decisions were made elsewhere too, with Formula One announcing their dropping of grid girls for the new season.

Despite Daniella and Charlotte being stripped of their live TV duties, both still appear on darts’ exhibition circuit and have gone on to have a fantastic year. Now, some nine months on from their controversial January, the duo have released their 2019 calendar.

We caught up with them in an exclusive Man On interview, where they discussed missing the live tour fun, darts fans’ ongoing support, going for a spot of fishing and why you need to check out their sexiest calendar yet…

Hello, ladies! It’s been a bit of a crazy year with the whole walk-on girl outrage at the start of the year. Will you be glad to see the back of 2018 for that reason?
Charlotte: It’s been an eventful year, but as they say: when one door closes another one opens.
Daniella: Although it’s sad we are no longer PDC walk-on girls, we have still had a very successful year and we have been overwhelmed by the support from everyone.

How much do you miss the touring PDC fun?
C: It sounds cliché but of course we miss our darts family! It was our life for so long.
D: The darts was a massive part of our lives, so we definitely miss touring with the darts circuit. As each 2018 tournament came round, we really missed being a part of it.

You’ve previously said some players admit they now feel lonely walking on stage on their own. Have you considered giving them cardboard cutout versions of you both to walk up with?
C: Ha ha, what a fantastic idea!
D: That would be brilliant!

If the PDC had a change of heart and brought back walk-ons, would you answer the call?
Both: Although it would be lovely, we really can’t see the decision being revoked. Which is a shame as we would’ve loved to continue doing the job!

How happy are fans to see you on exhibition matches?
C: It’s so nice that we still get to be a part of the darts and see the fans at the exhibitions, even if it’s not on TV!
D: We love our darts fans! They have been nothing but supportive since the walk-on ban, so it’s great we are still on the exhibition circuit.

You went fishing in the summer – how did you find that?
D: I enjoy fishing, it’s such a brilliant event. And it’s great to see everyone from the world of sport [at the PDC fishing day]. Charlotte and I did really well this year – we will hopefully be there next year too!

You look amazing as ever together in the new calendar. How fun was it to shoot?
C: It was so much fun! We wanted it to be a bright, sunny calendar and luckily the sun came out for us the day we shot it.
D: It was a beautiful day and we are so pleased with the results.

Where was the calendar shot?
C: We shot it at Rutland Water Nature Reserve in Leicestershire. It really was a beautiful location.

What are your hopes and wishes for 2019?
Both: We hope to have another successful and busy 2019. And who knows – maybe another calendar!

And on that note, give us one reason we should order your calendar this very second?
C: Just look at the pictures from it on here. Need I say more?! Ha ha!
D: If you miss seeing us on the TV, there’s 12 full months of us for you to enjoy!

Charlotte and Daniella’s 2019 calendar is on sale now and can be purchased on their official store by tapping here!

We’re on a mission to #KeepGlamourAlive! You can help us on our journey – and enjoy exclusive new content from your favourite models – by signing up to Man On VIP! There are two ways you can get involved…

Find out more about Man On VIP

Bunny beauties: All the sexiest Easter bunny girls in one place!

We use cookies to ensure that we give you the best experience on our website. If you continue to use this site we will assume that you are happy with it.OK